Sometimes it’s nice to flashback to a simpler time. A time where you could get away with calling your fat “baby fat” with the hope you would “grow out of it.” A time where your mouth was so full of metal it looked like the orthodontist was conducting a clinical study. Today, I will reflect on one of my shining moments from those so called simpler times. With that, I give you -

Toga Throw Down: A Tale by Sixth Grade Cory

During a quarter in 6th grade our whole “pod” studied the Roman Empire. Every day in history class we prepped for our big Roman Bowl we would have at the end of the unit. As you know from my previous blog, I love a good game show. The year before, I single handedly won the Geography Bowl so I was a pretty big name in the Bowl world. I hadn’t come to the realization yet that being smart wasn’t super cool in junior high, so I was PUMPED for this competition. A fun addition to the day – you had got to wear a toga. Thin sheets adorning awkward 6th grader’s chubby bodies. I could NOT wait! I am a quarter Greek and who better to wear a toga than a legit Greek goddess? I had it all planned out. I would curl my hair and pin it up perfectly, letting the curls fall gently down from the tussled up-do. I was going to look so ethereal and all of the boys would fall in love with me. Just call me Aphrodite. If you are thinking I must have looked drop dead gorgeous, I have included a picture to better your judgment. 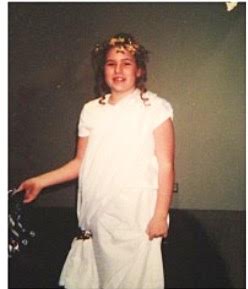 The night before I couldn’t sleep due to the anticipation. Not only because I was going to transform into the hottest thing the school had ever seen, but I was going to kill that competition. The morning of, my mom helped me with my sheet toga. She placed the pins perfectly so there would be no Janet Jackson moments, or so we thought. I literally rode the bus in a toga, walked around school in a toga, and had never been more confident.

The Gold Pod assembled upstairs in a large conference room where the Roman Bowl would commence. Food stations lined the room along with uncomfortable 6th grade kids dressed in their bed sheets they had slept on the night before.

My team was up first to compete. There were 6 of us on the team and honestly I can only remember one, my crush, who I just knew I was going to marry (definitely did not – no regrets!). Pretty sure he was totally checking out my toga the whole time and probably loved my two curled tendrils that fell nicely on either side of my face.

The buzzers laid in front of us and we were ready. I think I literally scored every point. My team was ecstatic! The boy of my dreams picked me up threw out his back, twirled me around and kissed me! THE END.

PSYCHE! They surprisingly weren’t as competitive as I was and didn’t really care. My mom warned me to stop getting so many questions right and let other people have a try. UH what???!! I just won the first round for my team and you tell me to back off the buzzer?! Jana, I am going for the GOLD!!

A few more teams competed while we waited for the semi’s to start. My team started pressuring me, “Cory, we didn’t study” they tell me. “You HAVE to win this for us, you’re our only hope”. I now know the pressure of Obi One- If you don’t understand Star Wars references I feel bad for you son, I got 99 problems but R2 ain’t one.

I reassured my team, “Guys! I got this! Did you not see how I dominated?? Don’t you know I’m a quarter Greek??” Roman/Greek, Potato/Potahto. They were confident and I started to get a little in over my head, trash talking to the other teams and such. Yep, trash talking over a SIXTH GRADE history competition. I was the coolest.

Semis were up and I was more than ready. I sat in front of my buzzer and Mr. Travelstead, my amazing history teacher, read the first question. I looked over to my mom and she spoke to me through her eyes. “Don’t even think about touching that buzzer, give the other kids a shot.” Mom. You don’t understand! This is my time! I could be the hero! Everyone would love me and all the boys would be fighting over me! I think the toga was giving me a little too much confidence.

Too much telepathy thinking went by and someone had already buzzed in and answered. Fine. I will give them ONE answer. During every question I couldn’t get my mom out of my head. Yoda  Mom, out of my head you must get!!

I was letting my team down. My buzzer stopped working and I knew it had to have been another Jedi mind trick. My mom was sabotaging me, but really saving me from TOTAL Loserville (I was only a visitor not a resident). The game was over and my team had been defeated. I let them down and I just knew I would never hear the end of it. I turned to apologize but they were already stuffing their faces with Roman delicacies (Lunchables). Did they not even care?! Ugh, 12 year olds.


The school bell rang and the day was over. I had been conquered and my title of Bowl Champion was stripped from me. I walked somberly to my bus, thinking that this day could not get any worse. I stepped outside and felt the cool breeze hit my stomach… MY STOMACH?! One by one the safety pins had popped. I looked down to find my white sheet lying over someone’s shoes that were not mine. I slowly raised my head to find none other than my future husband crush standing right in front of me. “IM NAKED!!!!!!” I screamed. Okay, I didn’t scream that and I actually wasn’t naked, but I might as well have been! Dressing that morning I thought I should wear something tight under the toga just so it wasn’t see through, because no one would ever see it, right??!! I wore my shortest tightest shorts and a TIGHT white t-shirt. I apologize for the visual. Sadly, this wasn’t my most embarrassing moment in junior high. I called off the wedding before he had a chance to, grabbed my sheet, mummified myself, and hopped on the bus to Loserville.
Posted by Unknown at 10:04 AM