#FlashbackFriday to Fifth Grade. I loved everything about that year. I had the best teacher, all of my friends were in my class, and I won Student of the Year. Life was good. Despite my chubbiness and horrendous teeth, I was a cool kid in elementary school. God blessed me with a beautiful best friend, Brooklyn, who was very popular. This in turn made ME popular. This was truly a miracle from the Lord and I’m pretty sure it’s recorded somewhere in the Old Testament.

One day Brooklyn and I were “playing” on the playground during PE. I use the word “playing” loosely because I’m sure I was finding the least physical activity to be a part of.  I was the kid that only got picked for tug-of-war because I was big. The kid that always wanted the presidential patch, but wound up with the participation. Seriously, who can do a pull up in 5th grade?!

While on the playground, Brooklyn decided to climb up a contraption I like to call, the Rainbow of Death (ROD). This death trap “toy” was a ladder that twisted in an upside down U shape and there were no directions! How was this even fun?! Or safe?! Yep, I was also that other kid. The kid that thought about safety at age 7. The kid who followed all of the rules and who loved reading any handbook just to find out what kind of rules we should be abiding by. I still love a good handbook.

Being besties since birth, Brooklyn knew I wouldn’t climb. She asked me if I would help her get down after she was finished playing on the ROD. I obliged and watched her from 60 8 feet below. After a few minutes, she had had her fun and I was ready to help her down. She started on her departure and screamed, “Oh no! I don’t need help anymore!’ I saw a shoe flying towards my face, but I didn’t have the quickest reaction time. Everything went black. I instinctively covered my face while blood gushed from my crushed nose. Brooklyn screamed and I assured her I was fine. She started to tear up and I started to chuckle.
This was always the reaction with the both of us.

In second grade we traveled to Dallas for her birthday and stopped at the Galleria to ice skate. I, Miss Safety, held onto the rail the whole time while Brooklyn was basically Michelle Kwan.  While I was gripping the railing for dear life, I see her aunt trying to get my attention. I shuffled quickly to exit and learned that Brooklyn had cut her lip and may have to get stitches. I started bawling. I run hobble to the medic’s office and she is laughing. WHAT?! Yes, we always had the adverse reaction. This event also scarred me for life and I am NOT a fan of ice skating. Hello! Sharp blades all around you! What if you fall and someone skates right over you and cuts you in half?! Sorry for now scaring you from ever stepping on the ice again.

Brooklyn led me to our PE teacher, and informed her that we had an accident. As expected of a PE teacher she was quite tough and demanded that she see it first – as if I were trying to get out of something physical! HA! I opened up my palms and she gasped after seeing the blood. She immediately became very sympathetic and instructed us to go right inside to the nurse.

You’re probably thinking “and then she went straight to the nurse, the nose was broken, and she went home! The end!” Nope! Fun Fact #21- I was NOT a doctor fan. I really appreciate everything they do for us, but I truly believed that if I went to the nurse she would tell me I had a terminal illness. Yes, I really thought she would give me a life altering disease diagnosis instead of just telling me my nose was broken.

I blame this fear on Little House on the Prairie. You may have thought this show was sweet and heartwarming. WRONG!! It instilled fear into the lives of innocent T.V. watchers everywhere. Sweet Mary, her eye sight was just a little blurry so she goes to the doctor, BAM she’s BLIND! Oh Albert, you have a nose bleed? Let’s go to the doctor. BAM he DIES! It didn’t help that Bailie told me that I also would go blind, and that when I had a nose bleed I was going to end up like Albert. Sisterly love.

So needless to say, we bypassed the nurse and went straight for the bathroom. All I knew before I looked in the mirror was that my nose was bleeding and that I couldn’t see very well because my glasses had been knocked off into the sand pit- Crooked glasses, broken nose, chubby and crooked teeth, just trying to provide a good visual. Removing my hands from my face I assessed the damage. My nose was HUGE and I was kind of excited. I knew I would be getting a lot of attention from this baby. It was split down the middle and was already turning black and blue. What really impressed me was that I was wearing a white Gap t-shirt (of course I remember what I was wearing) and not a spot of blood was found on the shirt! Skillz.

I cleaned myself up and Brooklyn and I headed back outside, avoiding the angel of death nurses office at all costs. My friends were so apologetic when they found my bent glasses. I laughed and reassured them that that’s how they looked before! Who let me go out of the house like that??!!

My nose swelled and pulsated all day, but I lied and said I was fine. Brooklyn felt so bad and tended to me all afternoon. At the end of the school day, I walked outside and my BFF Sam yelled to my mom from across the parking lot, “Mrs. Kennedy!!! LOOK AT CORY’S NOSE!!!” My mom was horrified. She was angry that I didn’t call her, but what if she would’ve taken me to the grim reaper doctor!! She assessed my nose at home and we decided it was in fact, broken. It was even bigger the next day, and the attention I received wasn’t what I had hoped for. People gasped when I walked by, children pointed, babies cried, dogs barked. It wasn’t pretty. Eventually, the swelling went down, but the bump still remains.

The moral of this story: A friend that breaks your nose is a friend for life. And don’t watch Little House on the Prairie. 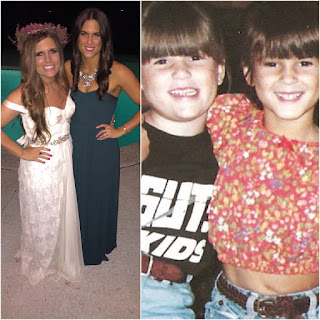